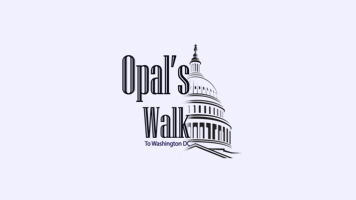 Congress will receive over 1.54 million signatures of support on September 23

announces on behalf of Ms. Opal Lee that the 93-year old activist from Fort Worth, Texas and ‘Grandmother of Juneteenth’ will deliver the 1.54 million signatures from her petition to make Juneteenth a national holiday to Congress on September 23.

With support from Change.org, all the signatures are being printed, packaged up and shipped to D.C, ready for Ms. Opal and her supporters to carry them from Lincoln Park – also known as Emancipation Park at 1:30pm EST and physically deliver them to Capitol Hill.

This will be followed by a press conference at the House Triangle at 2:30pm EST. Media and advocates of Juneteenth are invited to join Ms. Opal at the conference, where she will encourage Congress to pass and ratify legislation to make Juneteenth a Title 5 federal holiday, recognizing June 19 as a day to celebrate freedom from slavery whenever it came across America.

Ms. Opal said: “I am so thankful for all the young people, including celebrities like Sean ‘P. Diddy’ Combs, who have helped to let people know about my walking campaign and petition. We have big plans for the drop, and I invite you to come out and join me as we show Congress that it’s more than one little old lady in tennis shoes who believes Juneteenth should be recognized as a federal holiday.

“I truly believe Juneteenth is a unifier and can be the bridge that brings people together to talk about the hard issues facing our country. We need to celebrate FREEDOM from the 19th of June to the 4th of July, so everyone is included.”

Scott Cullather, President & CEO at [INVNT GROUP], the global creative agency working with Ms. Opal to amplify her mission added: “We are honored and beyond excited to volunteer our time and resources working with Ms. Opal and her team on both the September 23 petition delivery to Congress and other initiatives that will not only help Ms. Opal make her longtime dream a reality, but build momentum for one of the most significant events in our lifetime, one where Juneteenth will be officially recognized as a national holiday.”