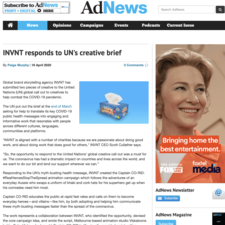 The UN put out the brief at the end of March asking for help to translate its key COVID-19 public health messages into engaging and informative work that resonates with people across different cultures, languages, communities and platforms.

“INVNT is aligned with a number of charities because we are passionate about doing good work, and about doing work that does good for others,” INVNT CEO Scott Cullather says.

“So, the opportunity to respond to the United Nations’ global creative call out was a must for us. The coronavirus has had a dramatic impact on countries and lives across the world, and we want to do our bit and lend our support wherever we can.”

Responding to the UN’s myth-busting health message, INVNT created the Captain CO-RID: #RealHeroesStopTheSpread animation campaign which follows the adventures of an everyday Aussie who swaps a uniform of khaki and cork hats for his superhero get up when his comrades need him most.

Captain CO-RID educates the public at rapid fast rates and calls on them to become everyday heroes—and villains—like him, by both adopting and helping him communicate these myth-busting messages faster than the spread of the coronavirus.

The work represents a collaboration between INVNT, who identified the opportunity, devised the core campaign idea, and wrote the script, Melbourne-based animation studio Viskatoons led by Peter Viska, who brought Captain CO-RID to life visually, provided script writing support, animated the script and identified a suitable voice over partner, and voice over and audio production specialists Abes Audio who provided sound design and recorded the script.

The Box of Home Heroes: Every Tissue Can Stop the Spread! creative takes the form of a craftily designed tissue box which features heroic characters and respiratory hygiene practices localised in Aussie slang, to inspire the public to become heroes in the fight against COVID-19.

Every Australian household would receive a complimentary box of tissues and the campaign can live on through partnerships with key supermarket chains, who would stock the tissue boxes throughout the duration of the pandemic.

INVNT executive creative director Adam Harriden says the agency is proud of both pieces of work.

“Both responses draw on the idea that to be a true hero, we need to be villains too, by joining forces to kill the coronavirus,” Harriden says.

“They have also been designed with a global lens, and we see the work evolving accordingly. The Captain CO-RID script and character can be localised so that he or she resonates with viewers in-region, and we can translate the on-box tissue messages and partner with local manufacturers and supermarket chains on the production and distribution of the tissue boxes, with donations going to the UN or its affiliated organisations in different countries or regions.”

The UN has received over 13,000 submissions so far with creators being selected on April 30.

Senior creative leaders from around the world are offering their feedback for free on the Global Creative Review platform which was launched in response to the brief to help creatives produce work that felt “truly universal”.View the article as it originally appeared online here.